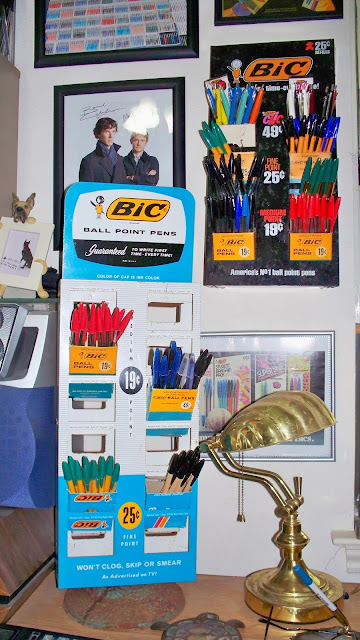 At a little over 24" high this is my tallest all metal BIC display. You would have been able to put 12 boxes of pens on each side holding a total of 144 pens. The display is in good shape with the only visible rust being on the base. The stand turns around so it would have been placed on some type of counter so someone would be able to spin it around. Old empty BIC boxes are now getting harder to fine. I need 8 more just to fill this one side. These types of metal and cardboard counter top displays are getting harder to find and this one shows that the bottom four slots are for the F-25 BIC fine point pen. The F-25 yellow fine point BICs are also very collectible along with the newer F-29 yellow fine points. Add all this great pens and displays to your collection. 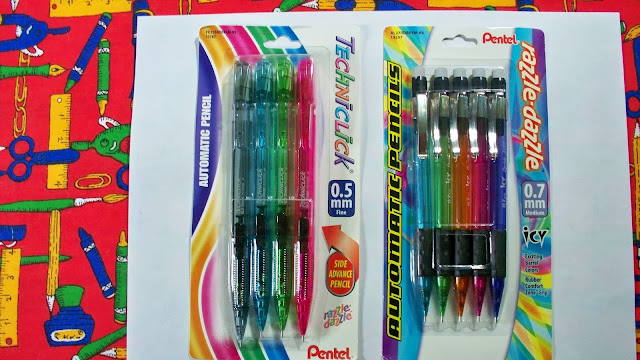 These are not new but they still look good. I believe that the Techniclick pencils came out about the time Apple was introducing the IMac G3. This would have been in the last 90s if I remember correctly. On the right are the ICY Raazzle-Dazzle 0.7mm pencils. I think these are a little newer and are still great pencils. These are the older AL 27 models. Great pencils in great colors that never go out of style. Add them both to your collection or send them with someone to school. 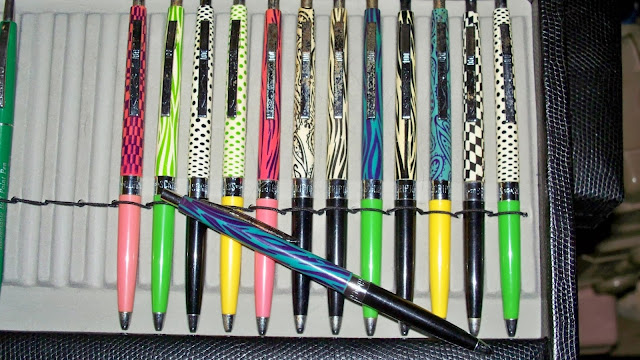 Here we have Scriptos attempt to cash in on the Hip Papermate Ops N Pops Pen. I have 13 of these pens and I believe I have them all. These 13 pens reprsent 4 different designs. These pens do include green and blue which were never used on the papermate Ops N Pops. These pens are not as well make as the papermates and most of the pocket clips have some rust but I do not plan on cleaning them unless they start to get real bad. I would prefer to keep them as is. I keep one or two working which I am sad to say is a job because these pens are very hard to get working. I pulled a set that I was sending to Mad Men because the refills would just not fit. They also seem to be harder to find then the papermates as most people have never heard of the Scripto Action Pen. The basic body style of the Action pen is the Scripto Wordmaster T260A. Scripto seems to have used the word Wordmaster on more then just their orignal 1946 Wordmaster 1.1mm pencil. Add them all to your collection and if you have time go to YouTube and search for the Ops N Pops song

Posted by My Supply Room at 7:55 PM No comments: 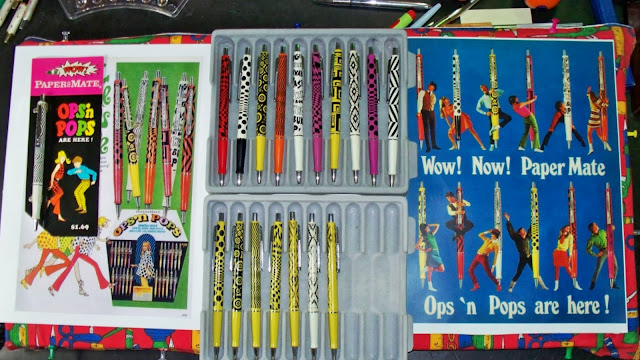 My goal was to get at least one of every design that can be found in the poster on the right. There are nine different designs. The top row of pens are those designs plus one extra. The hard part was finding 45 year old pens that still look new. The three on the second row represent pens that show ware plus some extras in great shape. Left hand side is one on a card. The top row, far right white pen with black stripes was the last one I needed. The second row yellow with black dots is the pen that appeared on Mad Men this year. While I do have all the designs some colors do look better then others. I have to many white and yellow. You can also see that there was no greens or blues included. Since I now have some extras I plan on using a few of them. Cost? All together about $2000.00 and that would be 15 in great shape and three that are not. I got some real good deals on some and had to mortgage the house to get others. What a great time it was in the late 60s when you could go the the store and pick up a  Papermate Ops N Pops pen to start your school year. The other pen company that tried to get in on this was Scripto with their Action Pens. I will post them again next time. Add them all to your collection.

Posted by My Supply Room at 9:05 AM No comments: 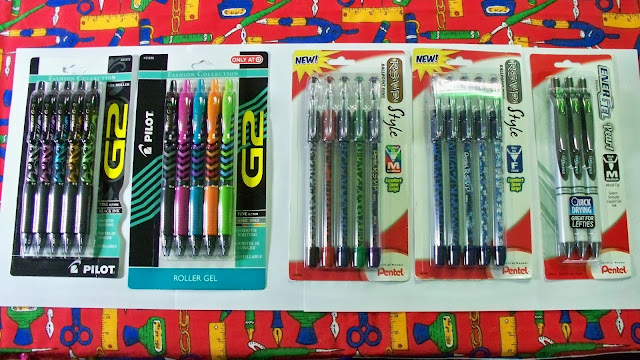 Here we have some new designs on some old standbys from Pilot and Pentel. I have always been a fan of bright colors and all these look good. The white EnerGels on the right have been for sale overseas for some time but now we get them. I picked those up at Staples. WalMart has also done a better job this year. Not as much shopping this year but I will be posting a few more items. Pick these items up before the kids get them all.