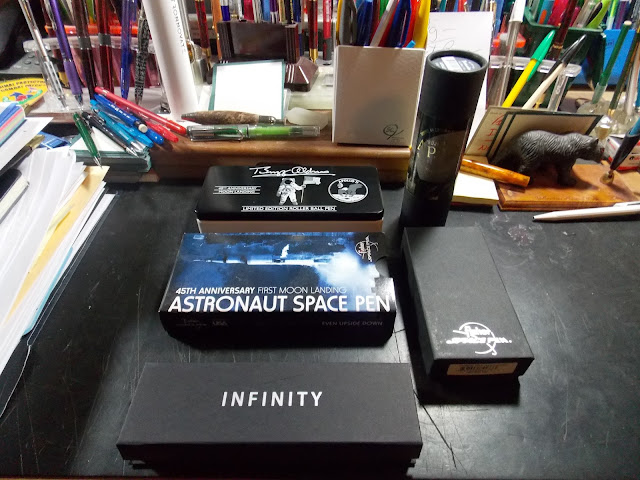 I have been waiting to show this set of five Space Pens for some time. Top we have the ACME Rocket Hero Buzz Aldrin Roller Ball Pen. Top right is the Retro 51 Apollo 1961-1972 Pen. Below Buzz is the Fisher Space 45th Anniversary Moon Landing Pen. To the right we have the Fisher 50th Anniversary Bullet Pen. Last is the Infinity Roller Ball Pen from Kickstarter with a 4.5 billion year old meteorite under glass in the end of the cap. The last pen received in the Supply Room was the Infinity. Best for last. 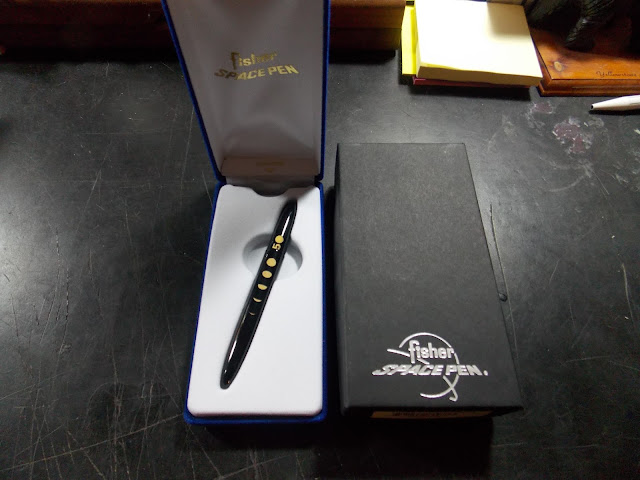 Very nice Fisher Space Pen that will fit in your pocket. 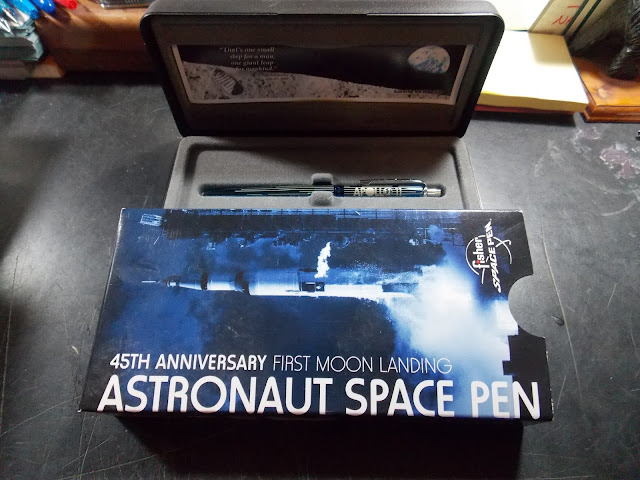 This is a nice pen. 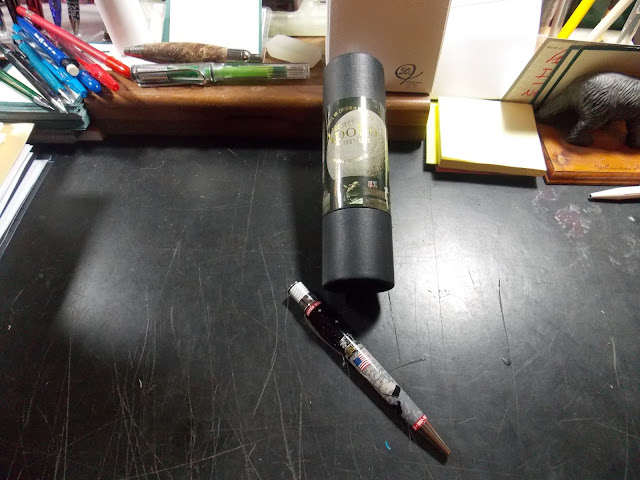 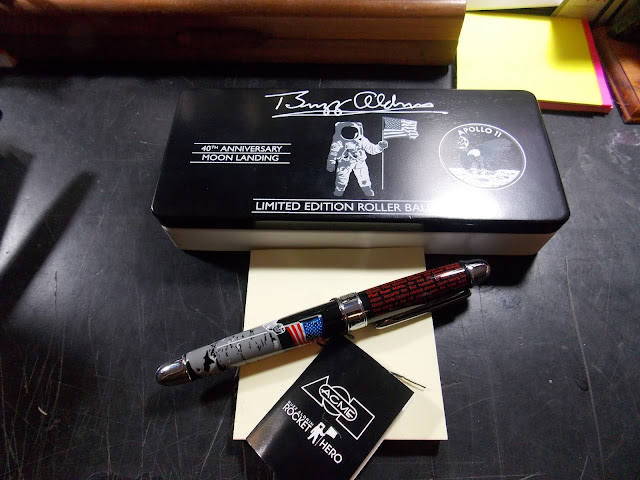 I think I have 5 ACME pens. Great graphics. 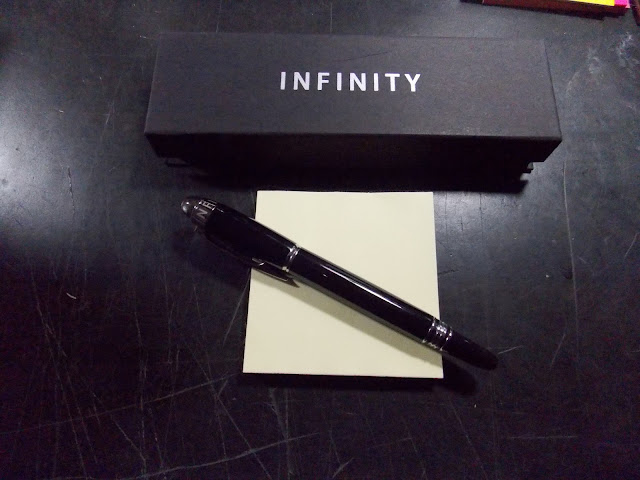 It is a very nice all black roller ball that feels good in the hand with a piece of history on the end. This was the meteorite that landed in Russia in 2013. I signed up on Kickstarter for this pen. 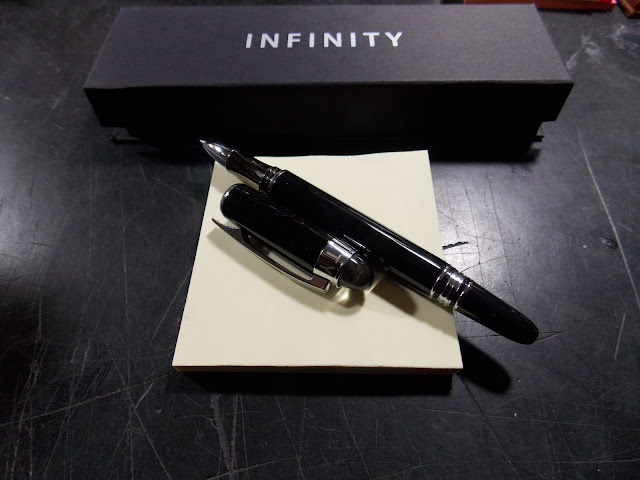 Hard to see but there is a small piece of meteorite. I can see some yellow, brown maybe a little orange color neatly placed in glass or plastic at the end of the cap. These pens willl be for sale once all the Kickstarter pens get in the mail. I believe you will be able to get a ball point or a fountain pen if you are not up for a roller.  4.5 billion years old.  Add them all to your collection.
Posted by My Supply Room at 5:08 PM No comments: 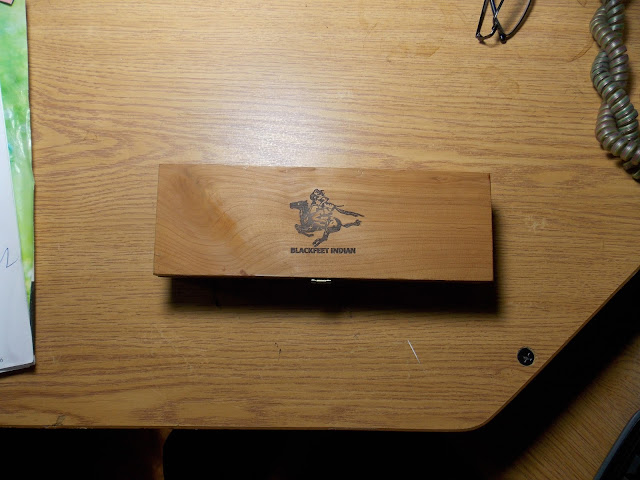 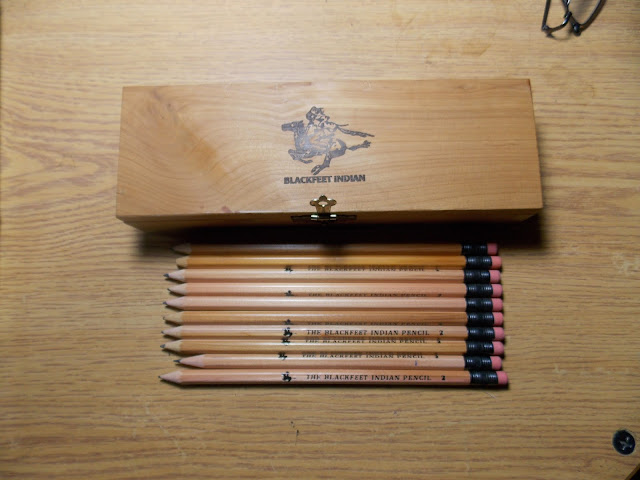 Don't plan on using these pencils so I can afford to give a few away. Any pencil people interested just email me at moose@hot.rr.com. US only. Add them all to your collection.
Posted by My Supply Room at 10:03 AM No comments:

Just Some Of The Pentels 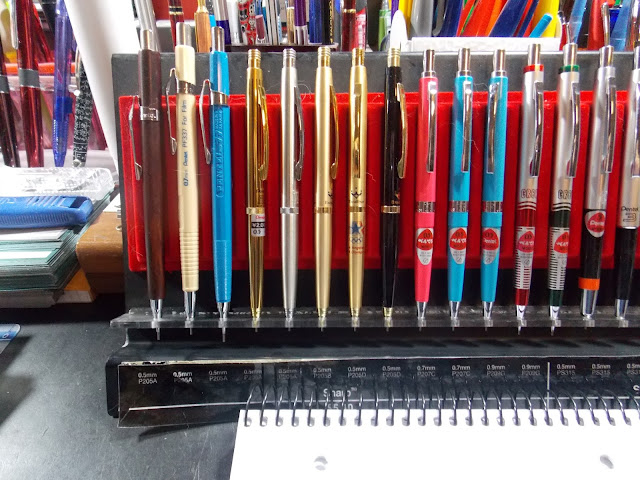 This is not all but I had this row out of the Pentel cabinet so I just took some pictures. 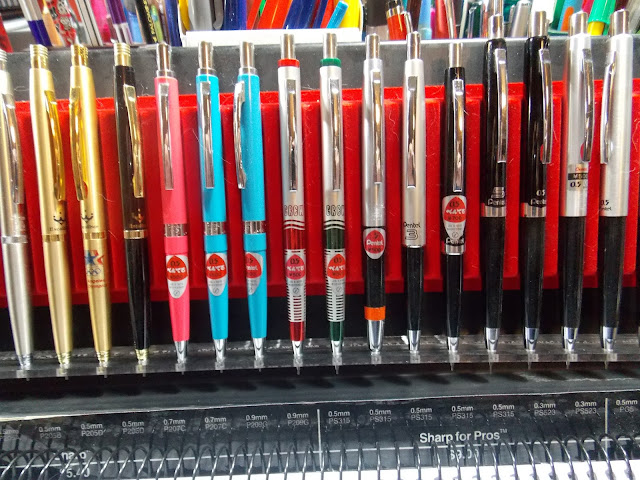 There are more pencils then there is space for but the collection must go on. 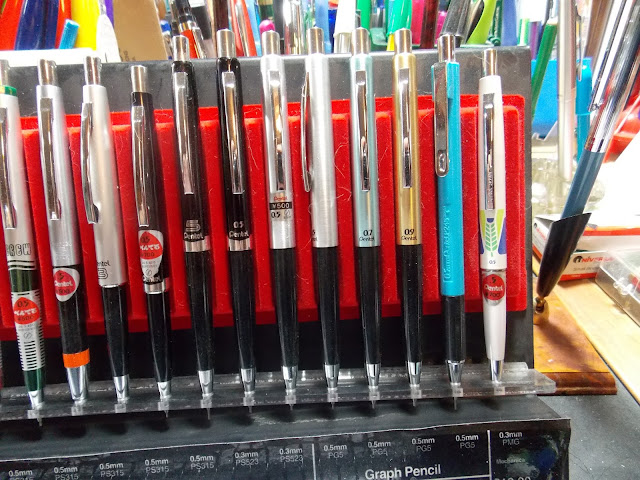 There are some nice one here. Thanks Germ. Add all these great Pentels to your collection.
Posted by My Supply Room at 8:19 AM 2 comments:

Labels: Just Some Of The Pentels 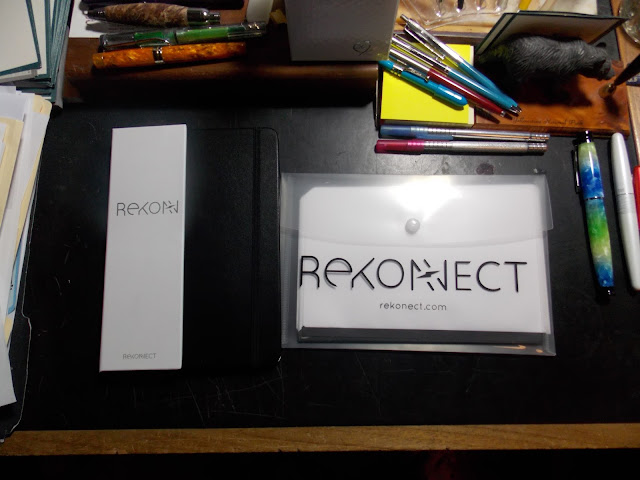 Here is a Kickstarter notebook I just got in the mail. A rekonect notebook. Down the spine of the notebook is a magnet and all the pages have some kind of metal strip down one side.This way you can take the pages out. write or draw on them and return them to the notebook. 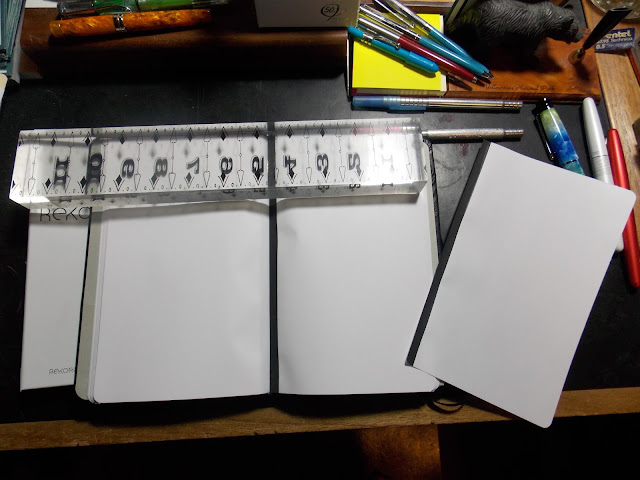 The notebook does take some time to get use to it. The instructions say don't take all the pager out at one time so that was what I did. I see why they tell you not to do that. 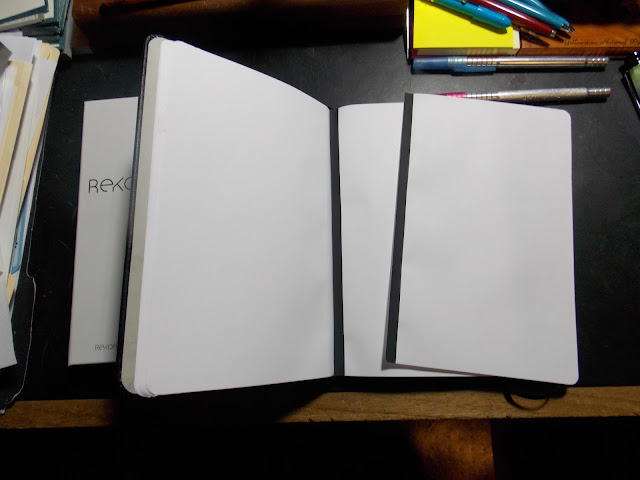 This notebook is not for everybody because it does require maintenance that some people just to do not want to fool with.  I find it fun so I will be using my notebook very soon. Add one to your collection.
Posted by My Supply Room at 5:59 PM No comments: 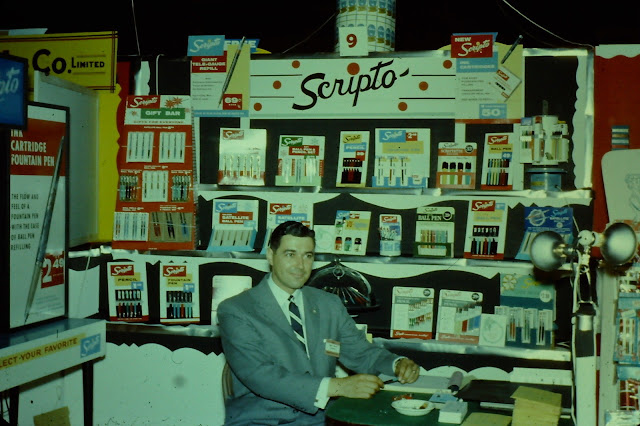 Scripto pen and pencils have always been a big part of the collections. While Scripto may not be big today they were in the past. My collection runs from the 1940s to the 1990s. I have a very large collection of pens and pencil and will be re-posting some of them very soon. This picture was taken at some kind of Trade Show. Add all these great pens, pencils and lighters to your collection.
Posted by My Supply Room at 5:35 PM No comments: 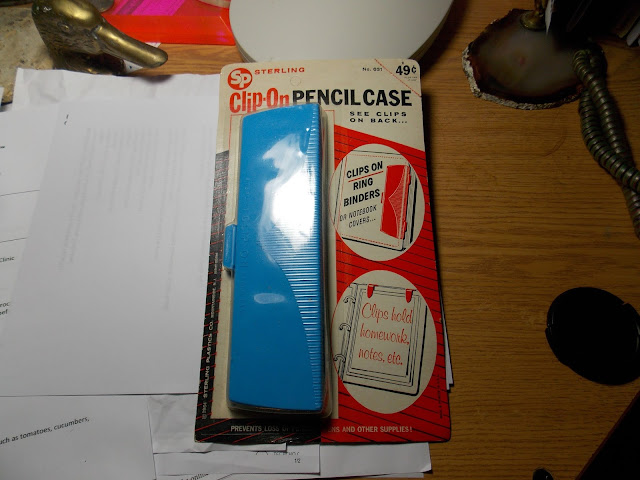 Here we have another Sterling Plastic Pencil Box. My collection is always growing with different pencil boxes and this one is from 1963. This model is a #631 that clips to your binder. The only real problem is that the binder can not be to thick. The box came with two pencils so you would be ready to go. Add these great pencil boxes to your collection.
Posted by My Supply Room at 7:51 AM No comments: 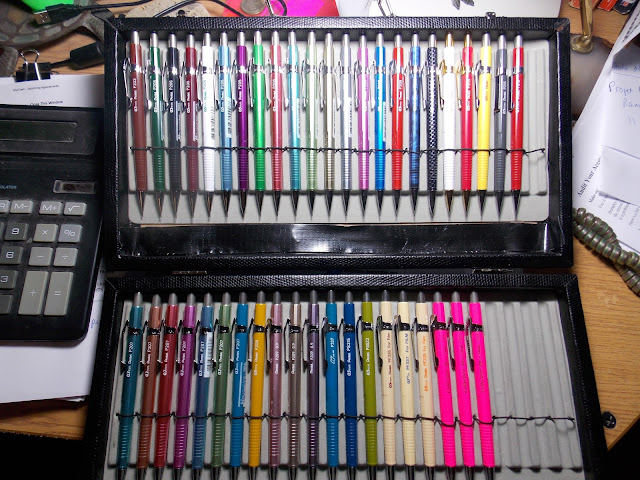 I may have one or two more somewhere in the office. There are also plenty new ones out there that I don't have. I remember when the first Pentel P200s came out in the 70s. I was in Germany at the time and every time they would be on the PX shelve I would buy all they had alone with the R3 rollerball pens. 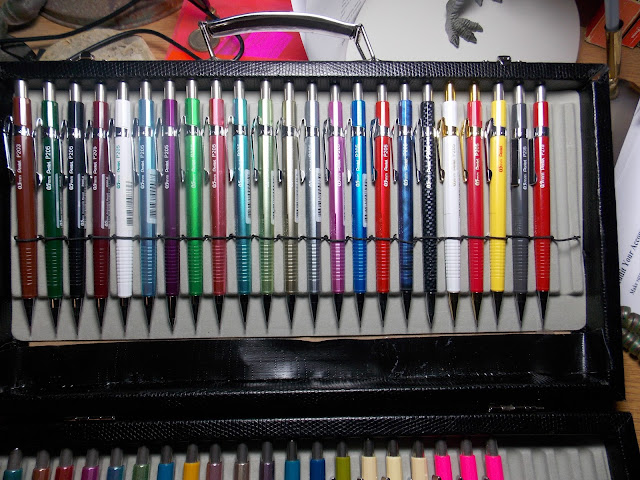 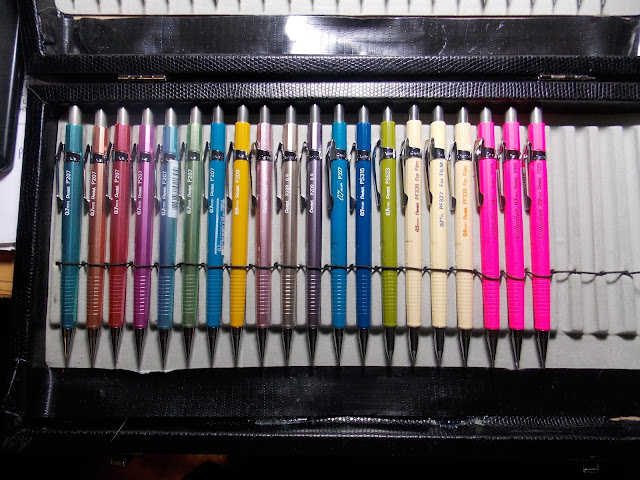