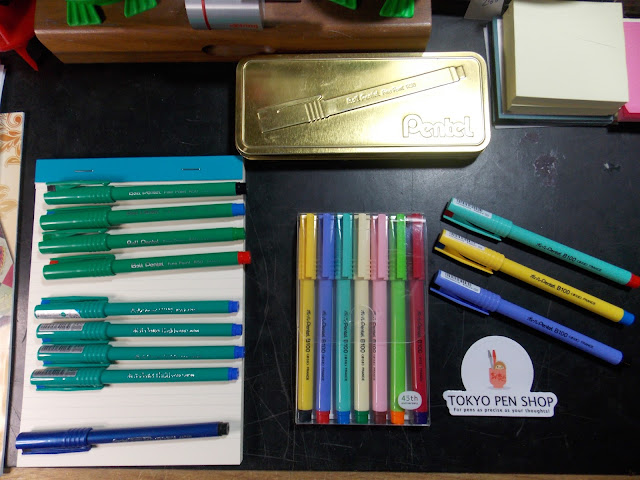 Just got these great pens in the mail today. On the right you will see the 45th Anniversary B100 roller ball pens from Pentel. This design goes all the way back to 1970 when Pentel came out with the R50 which are on the top left of the picture. Get over to www.TokyoPenShop.com and pick up the set or individual pens. You can't not go wrong with a Pentel Rollerball pen. Thanks Tokyo Pen Shop for bring a part of pen history to the US. 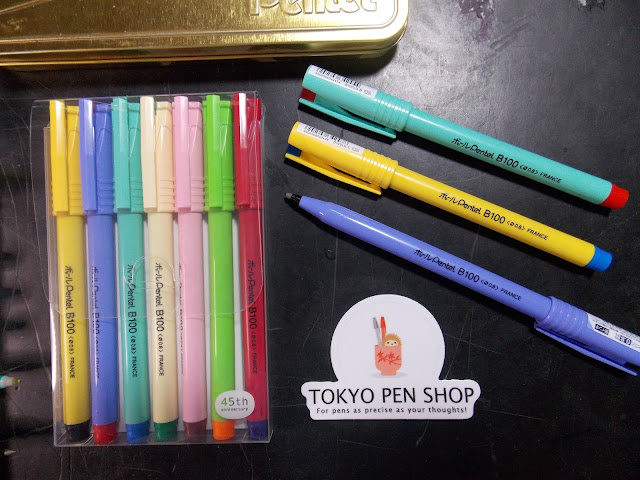 Here they are close up. The B100 are common office pens in Europe and Asia but they never took hold here in the US. The refillable Pentel R3/R4ss were a big hit but not the disposables. 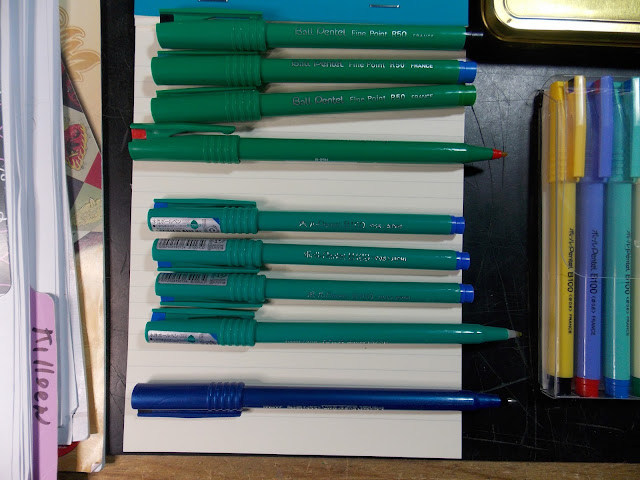 Her are the original R50s on top, some B100s and the BH16 superball. There are  some other models out there but these are good examples. 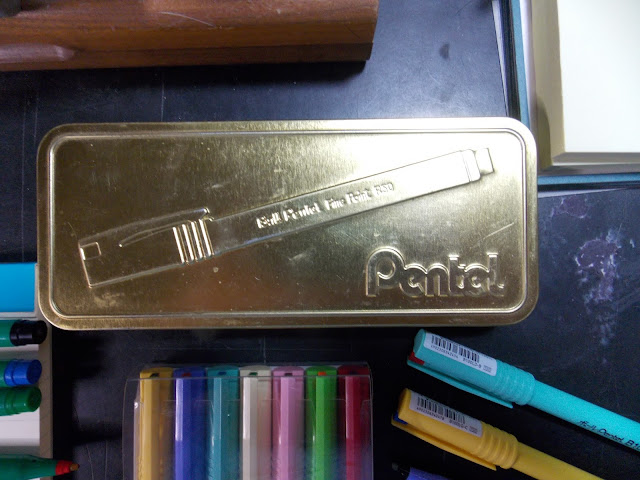 The Pentel R50 metal tin. Add all these great pens to your collection and Thanks Tokyo Pen Shop.
Posted by My Supply Room at 7:00 PM 1 comment: 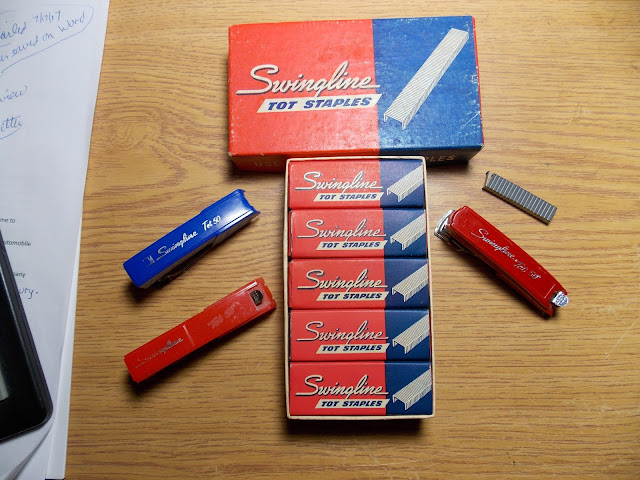 Who has not used one of they small Swingline TOT staplers? I know that I have been using them since the 70s. In the Army I kept one or two of these in my briefcase as I traveled around Germany on inspection trips. Here is is 2017 and I am still using them. I keep running out of the staples so I found this large box of staples that work fine. They are in longer rows of staples so I have to break them off but I don't remember a larger staple gun that uses this longer size row. 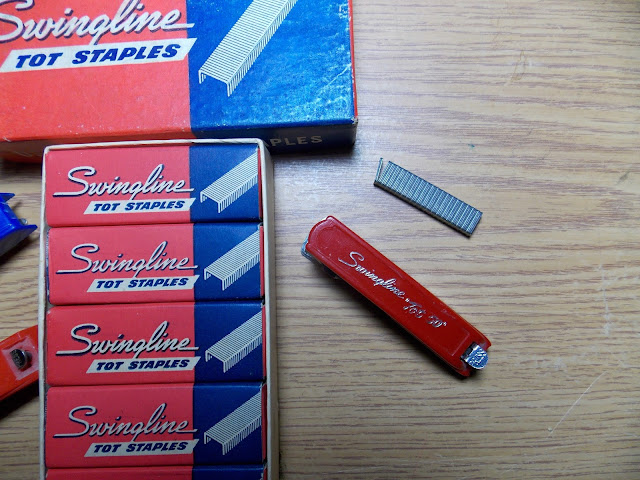 As you can see I have to break them off to fix. Add these great items to your collection.
Posted by My Supply Room at 8:51 PM 4 comments: 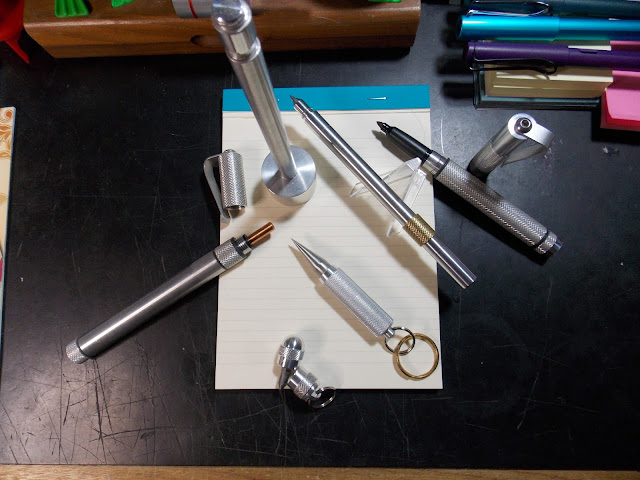 I don't know Bobby Davis over at www.vitalcarry.com Vital Carry/Spiffy Labs but I have invested a great deal of money in his Kickstarter projects. I think they are all here in the picture. 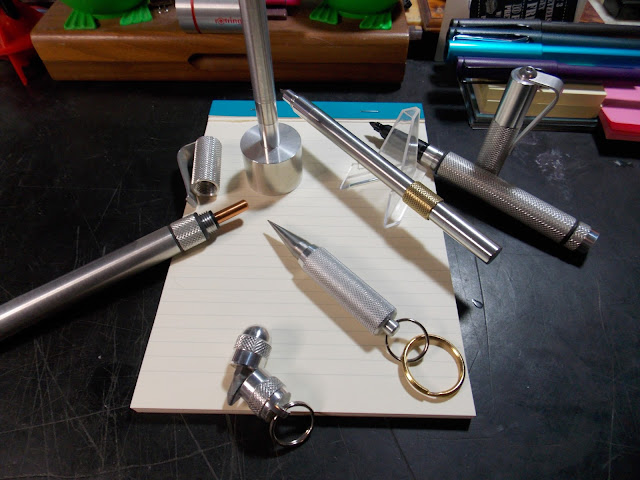 The top two are ink pens and on the right is a Sharpie Tactical Marker. The gold color band is a spinner on the sPEN. Both ink pens use Pilot G2 refills. 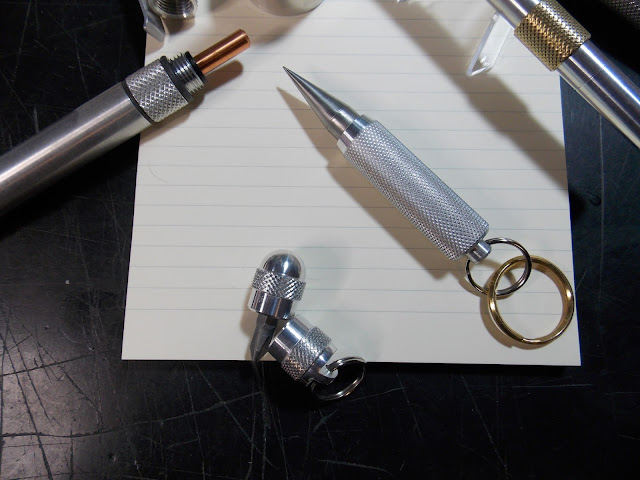 On the left we have the Sparky a fire starter, a small ice pick called the K-Spike and a Key Bit. screwdriver. 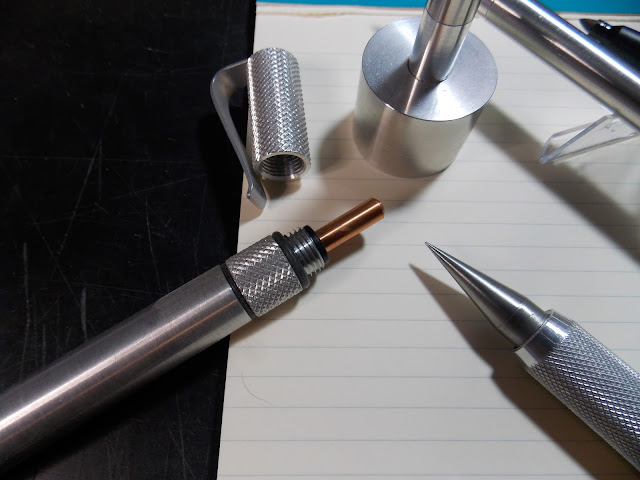 Here we have a picture of the base that came with the Counter Balance ink pen. The fire starter needs a battery to operate and the small ice pick can be used for a bunch of tasks. 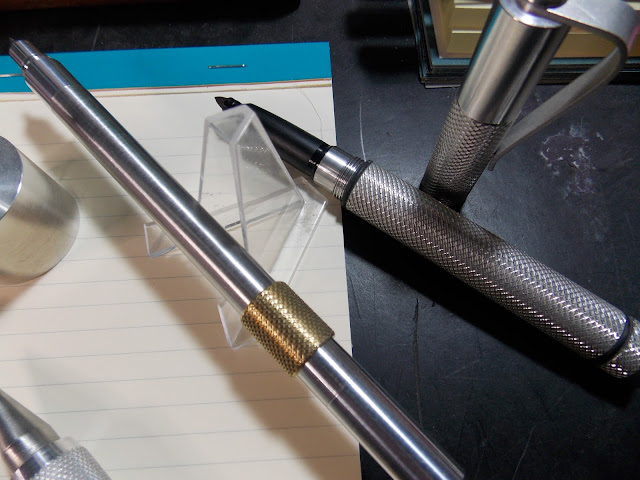 The Sharpie marker is great for someone who used the markers in their job but bad news is that Sharpie will no longer make the refills. Here is a good closeup of the spinner which just came in today's mail. Bobby Davis has a new metal click ball point pen with it's own base that just closed out on Kickstarter. Got one on order. Add all this great stuff to your collection.
Posted by My Supply Room at 7:43 PM No comments: 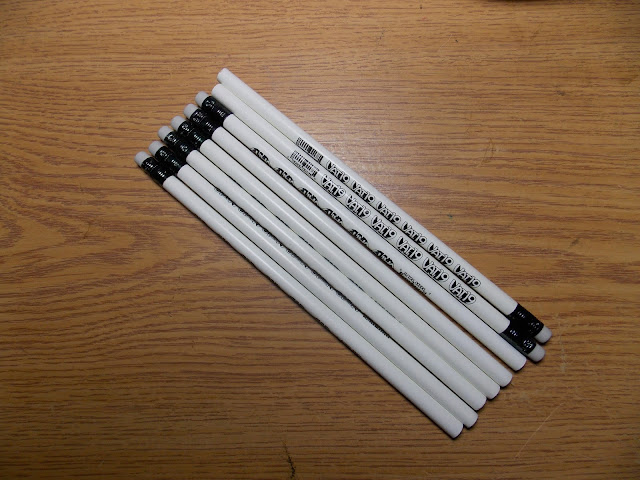 Had to get them because they glow in the dark. 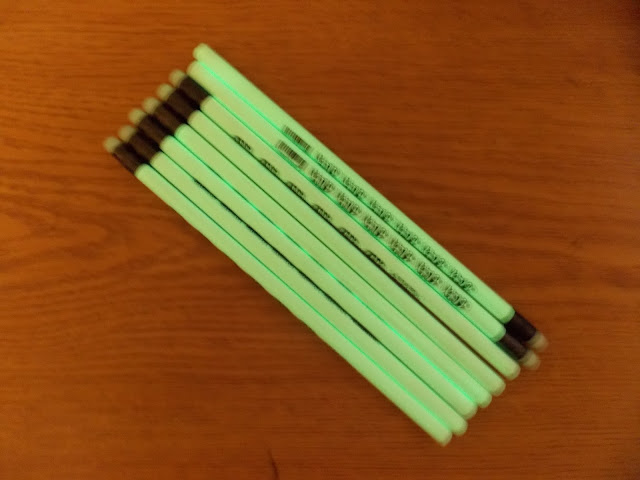 Add these pencils to your collection.
Posted by My Supply Room at 4:39 PM No comments: 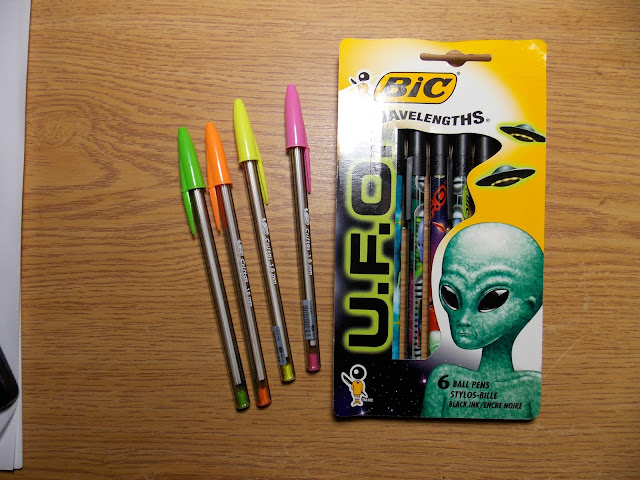 The BIC U.F.O. Wavelength pens are some of the harder sets to find. This is my second set because I opened one to put in my display case but still wanted one in the cardboard package. I also got it for a good price. These are from 1997. 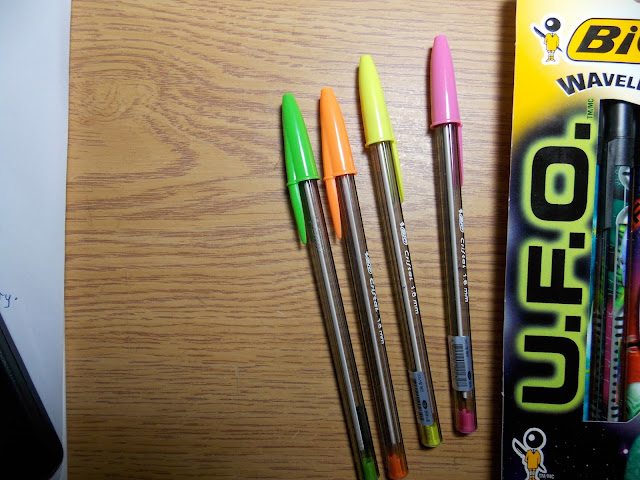 When is the last time you saw a yellow and a orange BIC Cristal pen? These pens are 1.6mm size so fine point they are not but still yellow and orange. The yellow is about the same shade as the yellow highlighter in the BIC 4 way I posted some time back. The orange is a very nice shade of orange. These were sold as a set of four. Add them all to your collection.
Posted by My Supply Room at 3:26 PM No comments: 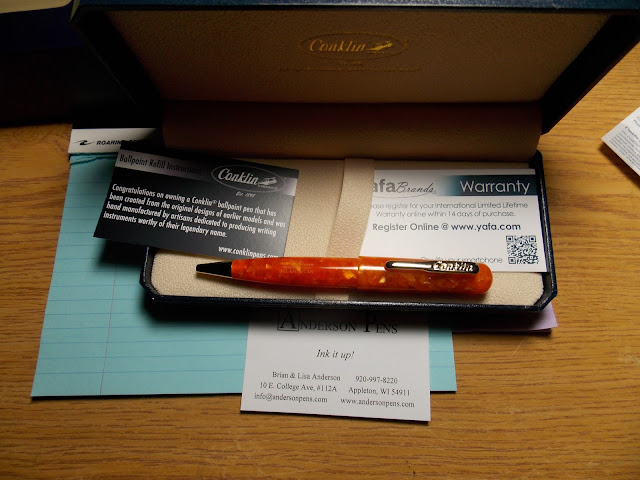 This is a very nice ball point pen. A few reviews I saw were not all the hip about the fountain pen but I went with the ball point. 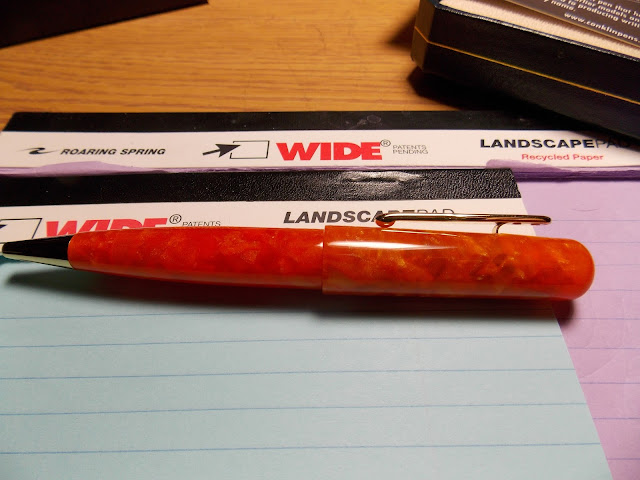 Very nice shade of orange. A great color for a pen. Add one to your collection.
Posted by My Supply Room at 7:01 PM 3 comments: 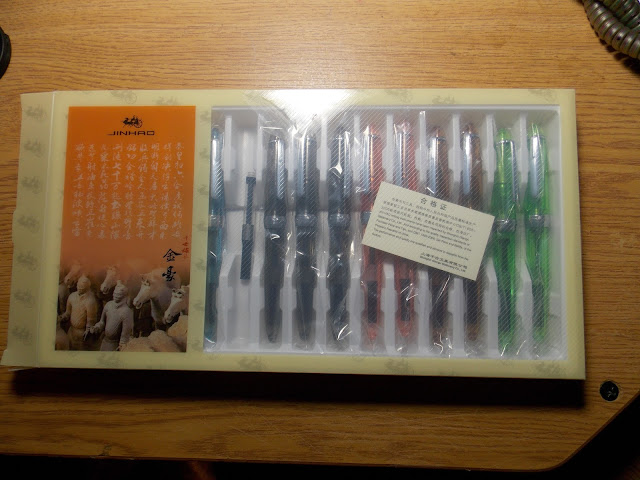 I ordered this set of 15 Jinhao 992 Demonstrator fountain pens for two reasons, they were cheap and I wanted the tray that holds the 15 pens. 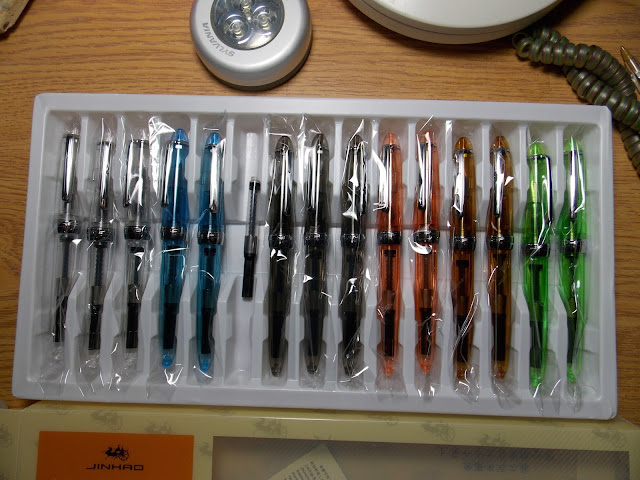 I used three of the pens with one not feeding at alll and two of them leaked. I was using an ink cartridge. 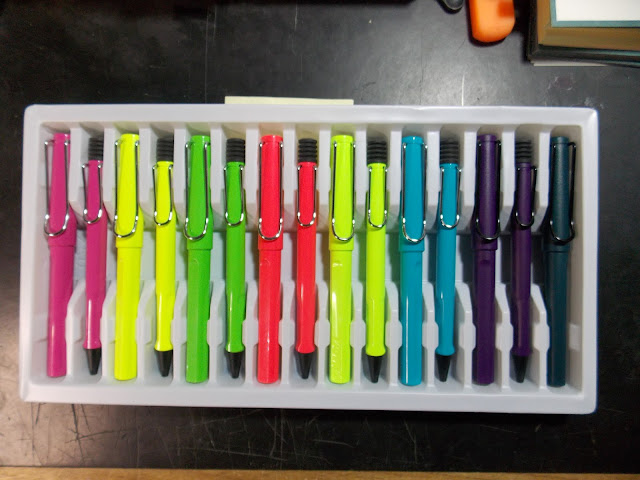 They are not staying here but it does make a good display. Add the tray to your collection.
Posted by My Supply Room at 7:22 AM 2 comments: 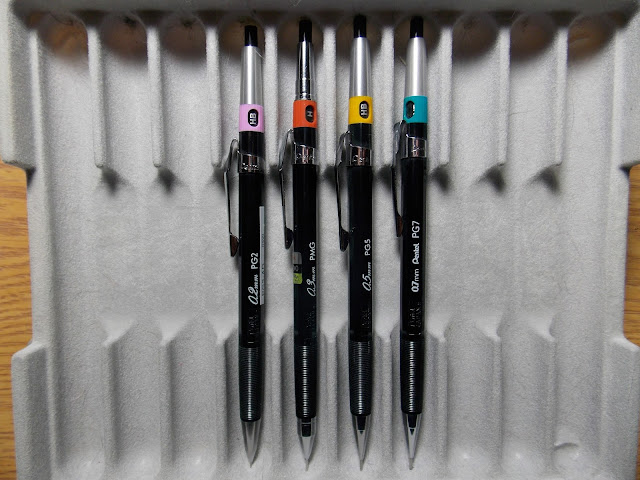 This part of the Pentel collection is slowly growing. I just got in the PGM 0.3mm pencil which is a replacement for the one I loaned out and never got back. There are a few variations on these pencils and you could check at the leadholders museum but it appears that the website is down. I only paid about $40.00 for this PGM pencil because the cap is missing. The good price was worth it. 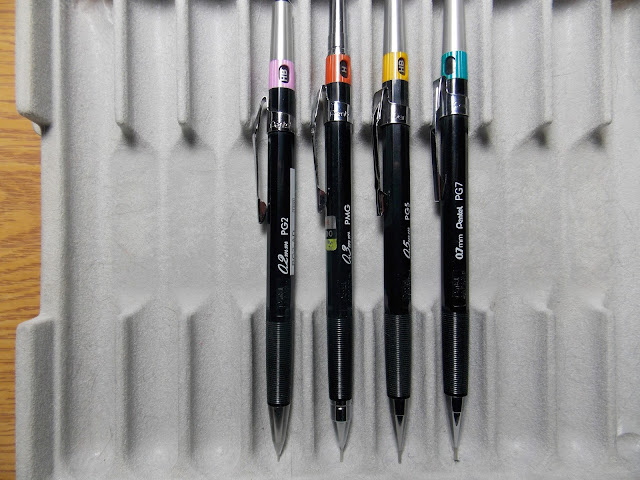 I think there s a 0.4mm PGM out there so the hunt continues. Add them to your collection.
Posted by My Supply Room at 2:54 PM 1 comment: 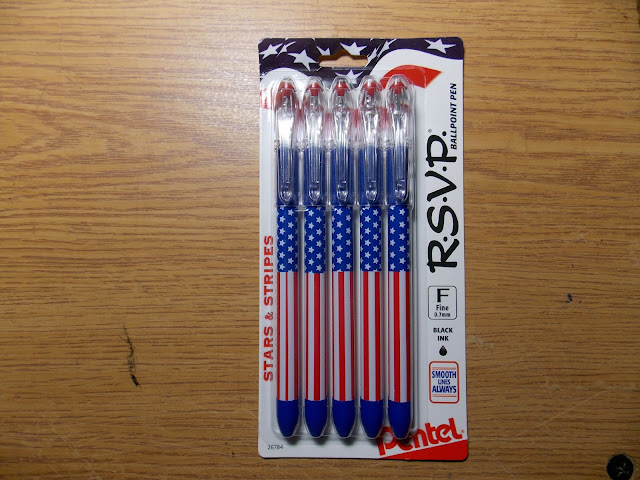 Happy 4th of July with the new Pentel Stars & Stripes!!!
Posted by My Supply Room at 2:31 PM No comments: