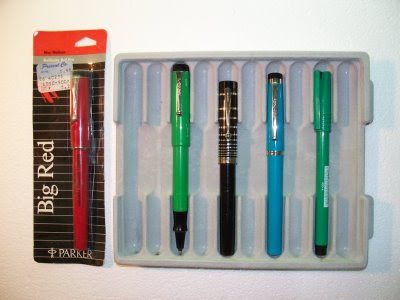 Here we have a nice set of ball point and roller balls from the 70s and 80s. In the package is a Parker Big Red Ball Point followed by a green Parker Big Red both of which use a standard Parker Jotter refill with adapter. Next is a Sheaffer No Nonsense Ball Point which uses a standard refill with adapter. We next have the Pentel P300 Roller Ball which uses the same refill as a Pentel Excalibur. All three of these pens seem to have been put out about the same time and were in competition with each other. I would think the Parker Big Red was the most popular. The Blue Pentel is my favorite of the three. The last one on the right is also a Pentel. This is the R-50 Original Roller Writer. Still sold in Europe and a best seller. This pen is a Pentel, made in France, bought in Germany then brought back to Texas and still works. All of these should be in your collection.